hello@connormollison.co.uk
Keep up to date with me on the socials:
Location Guide

The Dark Secret Past of Glenfinnan & Glencoe

Glencoe has been popularised over the years for its sheer beauty. But, did you know that it once had a deadly and gruesome history? In this little Scottish history lesson, I’m going to cover the infamous Glencoe Massacre and the Jacobite Uprising. 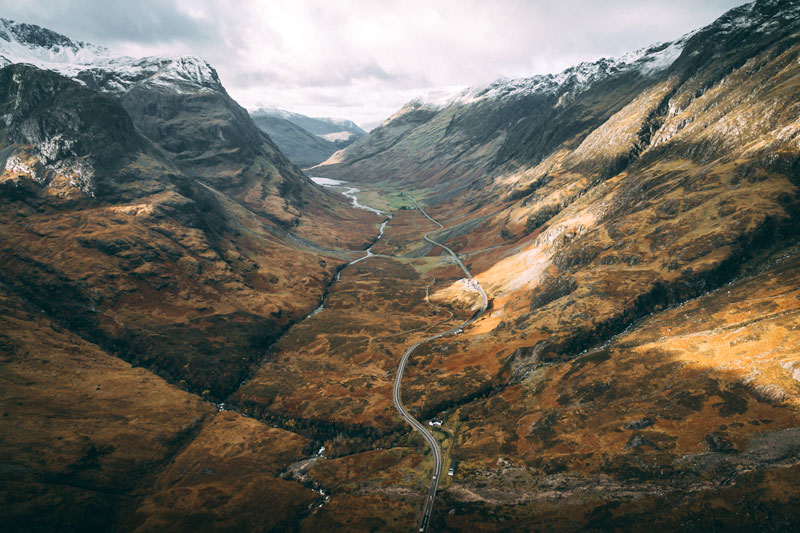 Glenfinnan and Glencoe are world renowned areas of natural beauty, located within the Lochaber Geopark in the Highlands.

There a several types of hiking routes throughout the region, depending on how active you want to be.

It’s less well known, that together, these areas have played host to past clan clashes and frightful massacres that are now a firm feature of Scotland’s ancient and glorious past.

A dark episode tucked away in Scotland’s history was the Glencoe massacre of 1692.

A total of 38 Clan members were murdered, and other family members and associates died of exposure trying to escape.

Allegiance to the King of England was the reason behind this terrible act. The MacDonald’s had gone to swear an oath to the king but went to the wrong place, Inveraray. This meant they were 5 days too late to take the oath by the deadline and pledge allegiance to the British King William III.

This horrific massacre was carried out by Clan Campbell led government troops in the dark of night, and the resistors were murdered in their beds as they slept.

The horrifying truth was that for the previous two weeks the Campbells had been on the receiving end of nothing but hospitality from the MacDonald’s.

The Campbells, however, had been biding their time and had always had the traitorous intention of the murder of the MacDonald’s so that they would be an example to other Clans that failed to pledge fealty.

However, the Campbell led government troops bungled the massacre and the sound of gunshots woke the majority of the Clan, giving many of them the chance to abscond out into the cold and snowy night.

The heinous crime came under the Scottish statute of Murder under Trust and has meant that the Campbell name is still associated with treason and that they’re not to be trusted.

Glencoe is home to The Lost Valley where the remaining members of the MacDonald clan fled and took refuge in the aftermath of the massacre.

It’s said to have been where the clan kept and hid stolen cows in their cattle rustling days.

The secret glen is surrounded on all sides by towering mountains and the winding stream provides mountain fresh water making it the perfect sanctuary to retreat to. Today, it’s a truly magical place to experience wild camping in the Scottish Highlands.

You can also hike along one of the breathtakingly beautiful escape routes that was taken that fateful night by the MacDonald women and children.

The escape route runs along a trail called Coire Gabhail (pronounced ‘Korry Gale’), the original name translates as The Hollow of the Spoils or Booty.

Known as the Jacobite uprising, which began when Bonnie Prince Charlie first raised his royal standard on the shores of Loch Shiel at Glenfinnan, on August 19th, surrounded by an army of 1,500 highland clansmen.

The families of the MacDonald’s, Cameron’s, Macfies and MacDonnell’s stood shoulder to shoulder with the young pretender as he staked his claim to the British throne.

The “Glenfinnan Gathering” has met every year since 1946 on the Saturday closest to the 19th August. It aims to take you back to the atmosphere of 1745.

The competitors don traditional Scottish red and blue tartan, kilts, and sporrans, so you can be sure you’ll experience the true atmosphere of these old-style yet contemporary games.

The Jacobite rebellion is probably one of Scotland’s more well-known historical battles. The Glenfinnan monument and visitors centre commemorates the Clansmen who fought and died in support of the Bonnie Prince.

This is the perfect place to pay tribute to the lone, kilted highlander who stands on top of the monument. There are also stunning panoramic views of this mountainous region.

In more modern-day popular culture, the Glencoe massacre and murder of the Douglasses at the Black Dinner of 1440 are said to have been the inspiration for the  ‘The Red Wedding’ in the epic book and TV series Game of Thrones.

Highlander movie fans will already know that Glenfinnan is the birthplace of Duncan McCleod. Glencoe was also the magnificent backdrop for the James Bond movie Skyfall.

Whatever you’re looking to discover, the Glencoe Geotrail is a fantastic way to discover more about how giant glaciers and fiery volcanic explosions are responsible for the glen’s rugged mountain peaks.

It’s a city that will keep any photographer busy for years. There are so many subjects and vantage points to choose from, not to mention the changing weather and vast...

How to Write a Photography Brief

When you’re organising a commercial photoshoot, knowing how to write a photography brief might be one of the last things on your mind. But, it’s typically one of the first...