hello@connormollison.co.uk
Keep up to date with me on the socials:
Location Guide

The ultimate guide to the Glenfinnan Viaduct and Jacobite Steam Train including travel information, vantage points, and train crossing times. 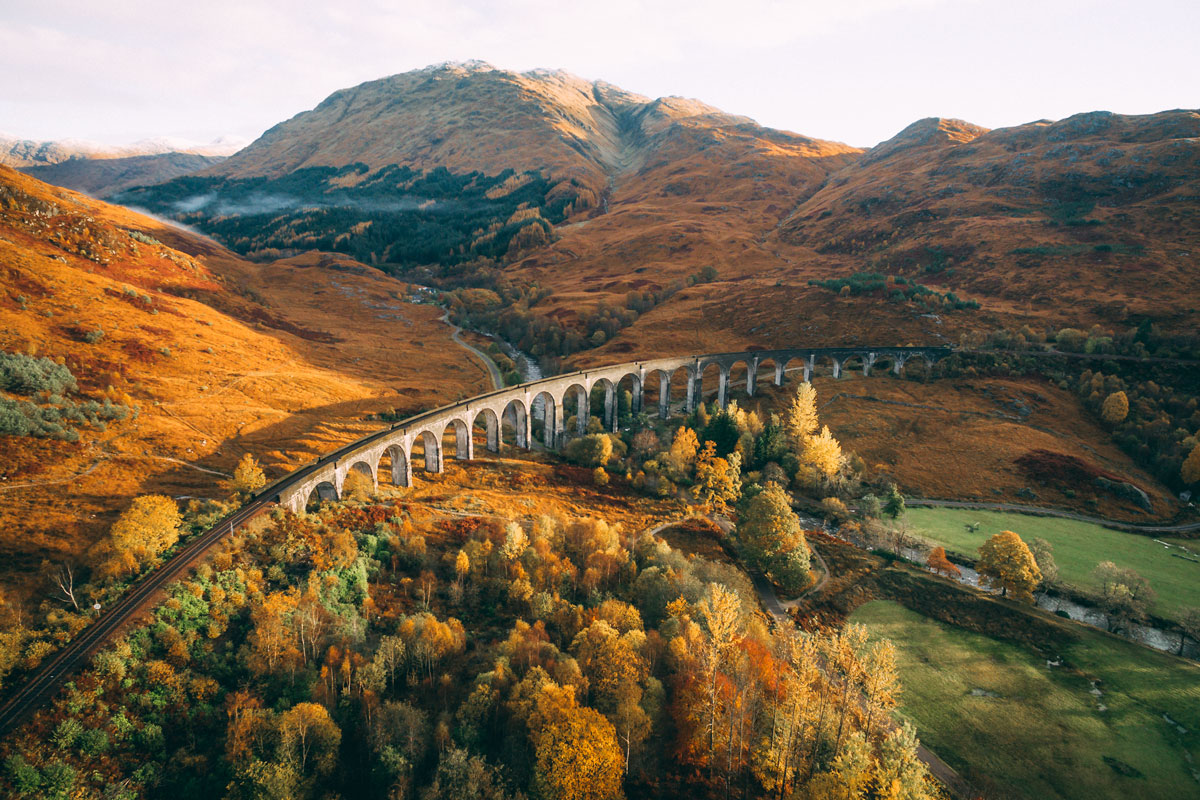 Popularised by Harry Potter, the Jacobite Steam Train has been described as one of the greatest railway journeys in the world.

Where is the Glenfinnan Viaduct?

The Glenfinnan Viaduct is a 30-minute drive west of Fort William, situated just off the main road (A836).

The stunning railway line is an easy-access and jaw-dropping location, attracting visitors from all over the world.

As can be seen from the map above, the viaduct is located at the head of Loch Shiel which stretches an impressive 20 miles.

Although now synonymous with “The Harry Potter Bridge” the viaduct is spectacular in its own right.

Being the largest railway bridge in Scotland, even if you’re not here to catch a glimpse of the famous Jacobite Steam Train, you’ll not be left disappointed.

Constructed in 1898, legend has it that during the building phase, a horse and cart tumbled into one of the large concrete piers.

Through the use of radar technology, it was discovered in the early 2000s that the incident, in fact, happened at the Loch-nan-Uamh viaduct.

How to Get There

and where to park

One of the easiest ways to get to the Glenfinnan Viaduct is by car since it is located just off the main road.

For many, Glenfinnan is a stopping point on a much longer Scottish road trip. It is conveniently located on the west of Scotland, often visited after passing through Glencoe and Fort William, on the way to the Isle of Skye.

Coming from Edinburgh and Glasgow, Fort William will be your last main pit-stop before reaching the viaduct. If this is on your way back from a trip further north, you’ll likely pass through Mallaig (just off the ferry back from Skye) or Fort Augustus.

As you pull up to the viaduct, you’ll notice the visitor centre which is where the main car park is located.

Warning: if you’re here to see the steam train, you should aim to park the car a good half-hour before the train actually passes. Otherwise, it can be near impossible to find a parking space.

There is a ‘pay and display’ system in place, costing £3 which is a contribution to the visitor centre. Alternatively, there is a smaller parking area just a couple of hundred metres along the road. 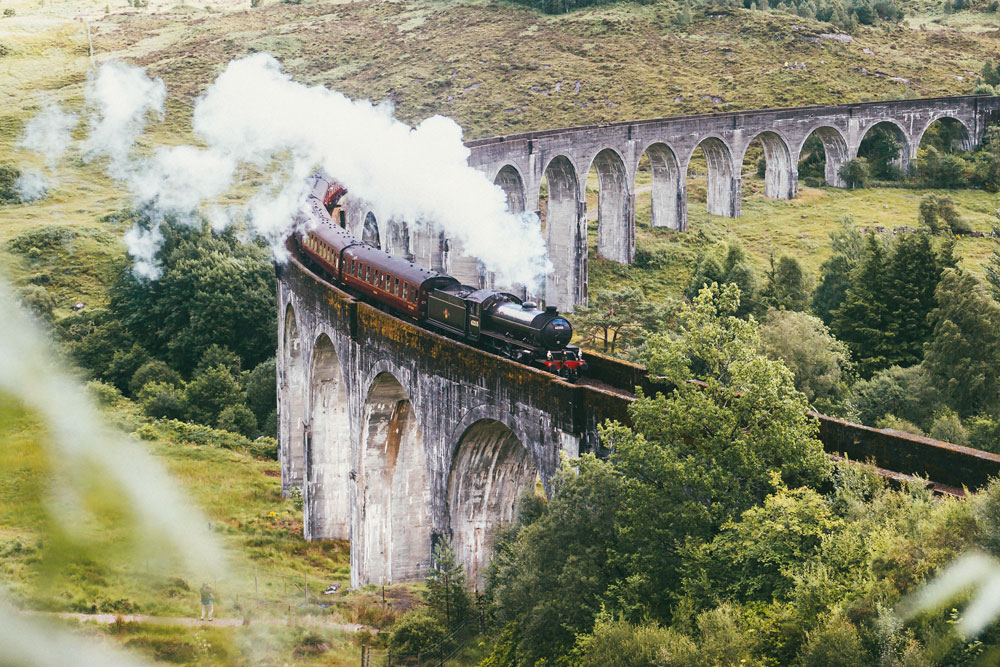 The Mallaig-bound steam train tour, which covers 84 miles of incredible Scottish landscapes, is said to be the greatest railway journey in the world.

The magical train trip begins near one of Scotland’s most iconic locations, Ben Nevis.

Should you be lucky enough to be on the train yourself, you’ll pass through a variety of jaw-dropping landmarks such as Britain’s deepest freshwater loch, Loch Morar, and Europe’s deepest saltwater loch, Loch Nevis.

You’d best be sure to pack the camera to capture the stunning scenery.

Arguably the most magical part of the journey is when you cross Glenfinnan Viaduct, featured in the Harry Potter films. At this point, the train slows down and may occasionally stop on the viaduct to allow you to snap away.

Glenfinnan Viaduct’s best view, in my opinion, is from the hillside on the left of the bridge as you face it from the carpark. The walk to this viewpoint takes a mere ten minutes at most.

Starting at the visitor centre, you should exit the car park, turn right and walk along the side of the road until you get to the second carpark.

From here, follow the path all the way to the bridge. You will pass underneath the bridge and go through a gate to your left which will take you up to the hillside.

Since this is arguably the best view you’ll get of the viaduct and the passing train, it gets pretty busy.

Another cracking viewpoint is from the hill by the visitor centre. Personally, I wouldn’t head here to get a shot of the steam train because you won’t get a face-on view.

Nonetheless, it is still a stunning vantage point to see the entire bridge stretching across the stream below. To get here, follow the path which leads on from the back of the visitor centre.

This route will take 5 minutes at the very most and there is a slight gradient.

Tips for Photographing the Steam Train

Including positioning, framing and camera settings

The viaduct with the steam plummeting out of the train is one of the most sought-after shots from a Scottish getaway.

There’s no denying how photogenic this place is so, no matter your skill level, you’re bound to come away with a shot to be happy with.

If you are planning on shooting the steam train, your main challenge will be avoiding the crowd of people.

Of course, Photoshop can help you somewhat but it’s easier to not have people interfering with your shot in the first place.

You should aim to set yourself up on the hill a little bit higher than other people.

By doing so, you will still get a nice face-on view of the railway bridge and train as well as having a decent enough angle to make sure people are outside your shot.

The last time I visited, I did just this and managed to cut out most people.

Another sneaky way to cut people out your shot is to frame it with fern leaves. It’s a common tactic among photographers to frame a shot nicely but it works especially well here when you need to block people out.

As long as you’re at the bridge in plenty of time, don’t panic about missing the train. You will hear the beautiful chugging sound before you see it.

It tends to travel slowly over the viaduct so that people on the train can admire the view over Loch Shiel. This means you don’t need to worry about putting the camera on a fast shutter speed.

You’ll also have time to switch between portrait and landscape to get a variety of shots.

There is a sign up near the viaduct that says for permission to fly a drone you need to call a phone number and pay £10. Heads up: this is not legally enforceable at all and you do not need to phone this number to fly your drone here.

The sign was put up by the landowner, Alistair Gibson, who claims “It takes me time to speak to people and try to regulate it. I explain it’s an administrative charge to do this, and issue them with a drone receipt – 99.9 per cent are prepared to pay”.

I understand that he may be trying to regulate drone usage here so that it doesn’t get out of hand. But, do keep in mind that the money goes to his estate and there is no legal basis on regulating drone usage on the land. Network Rail reminds people that they shouldn’t fly drones over the railway line for safety reason and full care should be taken flying drones near crowds of people.

It’s a city that will keep any photographer busy for years. There are so many subjects and vantage points to choose from, not to mention the changing weather and vast...

How to Write a Photography Brief

When you’re organising a commercial photoshoot, knowing how to write a photography brief might be one of the last things on your mind. But, it’s typically one of the first...
14 Responses